birth of Friedrich Wilhelm August Froebel at Oberweissbach in the Principality of Schwarzburg-Rudolstadt.

Friedrich was the sixth and youngest child of Pastor Johann Jakob Froebel. His mother died nine months after his birth in February 1783. Friedrich's grandfather, Johannes Froebel, (died 22 July 1738) was the gamekeeper/forester in Neuhaus am Rennsteig for the Prince of Schwarzburg-Rudolstadt. The grandmother was from Oberweissbach.

A brother of his mother, Superintendant Johann Christoph Hoffmann of Stadt-Ilm, took over the care of the ten year old Friedrich. Stadtilm is a little town in Thuringia on the river Ilm between Rudolstadt and Erfurt.

In the summer of 1797, Froebel moved to Hirschberg, a little town in the upper region of the river Saale in Thuringia at the border to Bavaria, to learn about forestry, valuation, landsurveying and geometry.

Froebel a student at Jena

Froebel works as a Forester at Bamberg

Froebel began to teach in Anton Gruner's school at Frankfurt.

In a letter to his brother, he laid down his cherished plan of a school:

"Not to be announced with trumpet tongue to the world, but to win for itself in a small circle, perhaps only among the parents whose children should be entrusted to his care, the name of a happy family institution;

Froebel attended the training institute run by Johann Pestalozzi at Yverdon. Froebel left the institution accepting the basic principles of Pestalozzi's theory: permissive school atmosphere, emphasis on nature, and the object lesson. Froebel, however, was a strong idealist whose view of education was closely related to religion. He believed that everything in this world was developed according to the plan of God. He felt that something was missing in Pestalozzi's theory: the "spiritual mechanism" that, according to Froebel, was the foundation of early learning. "Pestalozzi takes man existing only in appearance on earth," he said, "but I take man in his eternal being, in his eternal existence." Froebel's philosophy of education rested on four basic ideas: free self expression, creativity, social participation, and motor expression.

Froebel studies at the University of G�ttingen

Froebel in Berlin to study mineralogy under Weiss and jurisprudence under Savigny.

With other Berlin students, Froebel joined the famous volunteer corps of L�tzow's "Black Riflemen," in the Prussian army against Napoleon. He met two friends, who were to remain with him throughout his lifetime and to support him in all his educational endeavours; Langenthal and Middendorf. After the close of the war, Froebel claimed the fulfilment of the promise made to him of an appointment in the mineralogical museum at Berlin, and resumed his studies there, but always with the object of completing his own fitness for an educator, and when offered a valuable post as mineralogist at Stockholm, he declined it as foreign to his educational purpose.

"The world of crystals proclaimed to me in distinct and unequivocal terms the laws of human life."

"Man in his external manifestation, like the crystal, bearing within himself the living unity, shows at first more one-sidedness, individuality, and incompleteness, and only at a later period rises to all-sidedness, harmony, and completeness."

Froebel founded the Universal German Educational Institute at Griesheim. In 1817 he moved the school to Keilhau and is joined by his friends Heinrich Langenthal and Wilhelm Middendorf.

publication of "Principles, Aims and Inner Life of the Universal German Educational Institute in Keilhau"

Froebel published his first book, The Education of Man, which was translated into English in 1885.

Froebel designed a large box of 500 wooden blocks, based on the one inch cube, including square columns between two and twelve inches long. Froebel was concerned that existing sets of building blocks discouraged discovery and creativity because they were highly decorated, realistic and lacked mathematical or geometric logic. Froebel also used these blocks at Keilhau to teach mathematics.

After a brief stay in Berlin, Froebel moved to Bad Blankenburg, near Rudolstadt and early childhood education. His Play and Activity Institute featured games, play, songs, stories, and crafts to stimulate imagination and develop physical and motor skills. The materials in the room were divided into two categories: "gifts" (gaben in German) and "occupations" or activities. Gifts were objects that were fixed in form such as blocks. The purpose was that in playing with the object the child would learn the underlying concept represented by the object. Occupations or activities consisted of material that children could shape and manipulate such as paper, clay, sand, beads, string etc. There was an underlying symbolic meaning in all that was done. Even clean up time was seen as "a final concrete reminder to the child of God's plan for moral and social order." 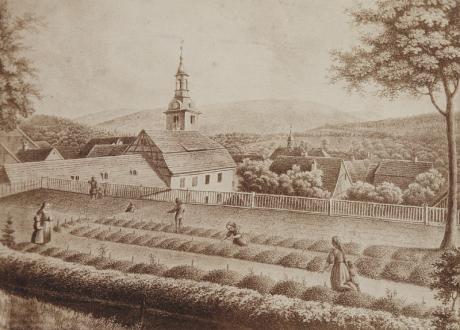 A long strip of land became an essential part of the Kindergarten where the children planted and nurtured flowers, fruit and vegetables.

Kindergarten was a new word created by Froebel to express his vision for early childhood education.

"Children are like tiny flowers; they are varied and need care, but each is beautiful alone and glorious when seen in the community of peers."

publication of Mutter und Koselieder, a series of songs designed to help mothers provide sensory stimulation and educational play for children from the first months of life

first meeting with Bertha Marie von Marenholtz Buelow in May

21 June 1852, Marienthal, at half past six in the evening Friedrich Froebel after a short illness departed this life.

Ernest Luther a descendant of the family Martin Luther, created the grave stone

Between 1848 and 1852 thirty one kindergartens had been founded in German cities. Unlike other educational institutions, many kindergartens were open to children of all social classes and religious denominations, Jewish as well as Christian. The teachers encouraged tolerance and understanding among these diverse segments of the population.

The word Kindergarten included in the Oxford English Dictionary. In England, "Infant Garden" is the usual name for kindergartens based on Froebel's methods 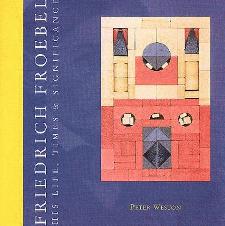 Friedrich Froebel : His Life, Times and Significance
This book by Peter Weston for the general reader is an illustrated life that places him in the turbulent political and intellectual context of his times. It also identifies those aspects of his educational practice that are of enduring value in the contemporary world.
Download this book free as a pdf file of buy online

Inventing Kindergarten uses extraordinary visual materials to reconstruct this successful system, to teach young children about art, design, mathematics and nature.
Buy this book as hardcover or paperback from amazon.com

To Froebel, play provided the means for a child's intellectual, social, emotional and physical development. "Play is a mirror of life", he wrote, leading to self discipline and respect for law and order.
A Child's Work: Freedom and Guidance in Froebel's Educational Theory and Practice